Warning: "continue" targeting switch is equivalent to "break". Did you mean to use "continue 2"? in /homepages/30/d658115368/htdocs/clickandbuilds/CarGuy/wp-content/plugins/revslider/includes/output.class.php on line 3708
 Porsche Cayenne Sets Record - By Towing a Jumbo Jet! | Car Guy 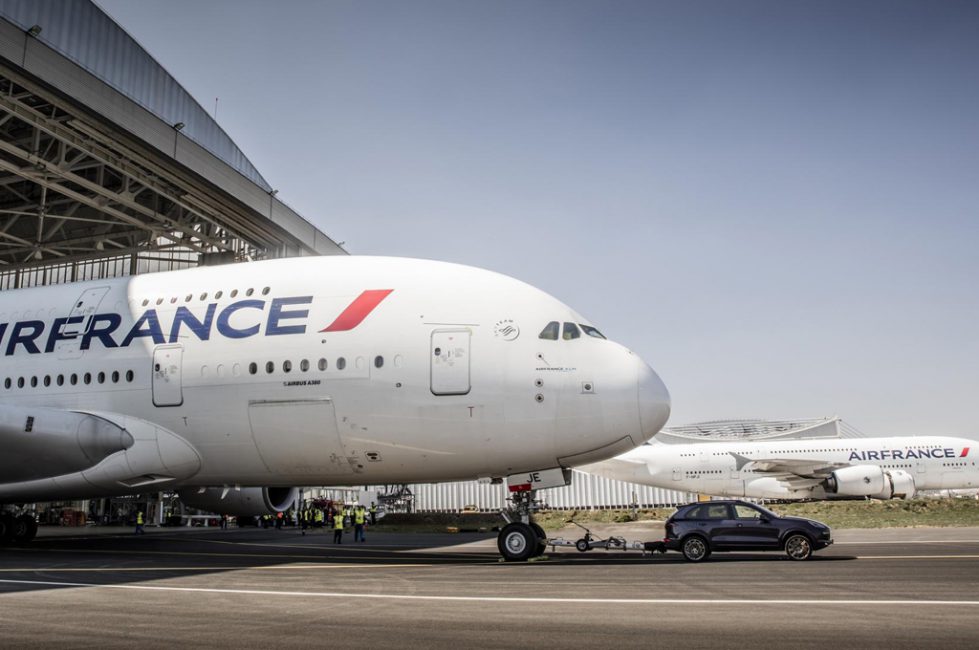 Remember that time VW’s Touareg towed a 170 tonne airplane setting a record in the process?  Well, forget about it, because the record has been officially shattered.  Properly destroyed and annihilated, by Porsche of all companies.  Porsche’s Cayenne to be more specific.

A Cayenne S Diesel just pulled a 285-tonne Airbus A380 operated by Air France, setting the new Guinness world record.  That figure, in case you were wondering, trumps the old record by 115 tonnes.  Quick math shows that the airplane is over 100 times heavier than the 2-tonne SUV, but that’s not even the most impressive bit.  Why?  Because the Cayenne in question was completely standard.  That’s right.  No special tyres, upgraded gearbox or a stronger engine.  Your bog-standard Cayenne S Diesel.

The record run, believe it or not, wasn’t directly organized by Porsche themselves.  It was the brainchild of a chap called Richard Payne, a technician over at Porsche GB.  Most of the UK car magazines and reviewers know him personally as he’s the guy who usually delivers cars to photoshoots or drops them off for a review.  He tows them in a, you guessed it, Porsche Cayenne S Diesel.  It was whilst towing several Porsches to a drop-off location that Mr. Payne came up with this ingenious idea.

Doing some quick calculations he was able to conclude that the Cayenne’s powertrain was strong enough to both pull and withstand the jumbo-jet, so he gave Air France a call.  They kindly agreed to lend him a spare A380 and the challenge was on.  After some preparation the Guinness official was brought down to the track, along with the plane and the SUV.

With everything else set, the A380 was attached on the Cayenne’s special towing equipment (slotting onto the regular tow bar), and the test could being.  With 385 bhp and a staggering 627 lb-ft of torque the Cayenne had no trouble pulling the jumbo-jet over 42 metres across the strip at Paris’ Charles de Gaulle Airport.  For reference, they tried to do the same test with a less-torquey petrol-powered Cayenne, but the outcome was pretty much the same.  What kind of car company would Porsche be if they didn’t record this all in cinematic fashion for your viewing pleasure eh?  Sit back and watch as the Porsche Cayenne sets a record:

Can the new Porsche Cayenne set record be beaten?  Probably.  Would anyone try to however?  We doubt it.  People buying Cayennes couldn’t care less about towing, but it’s a nice record to have nonetheless.